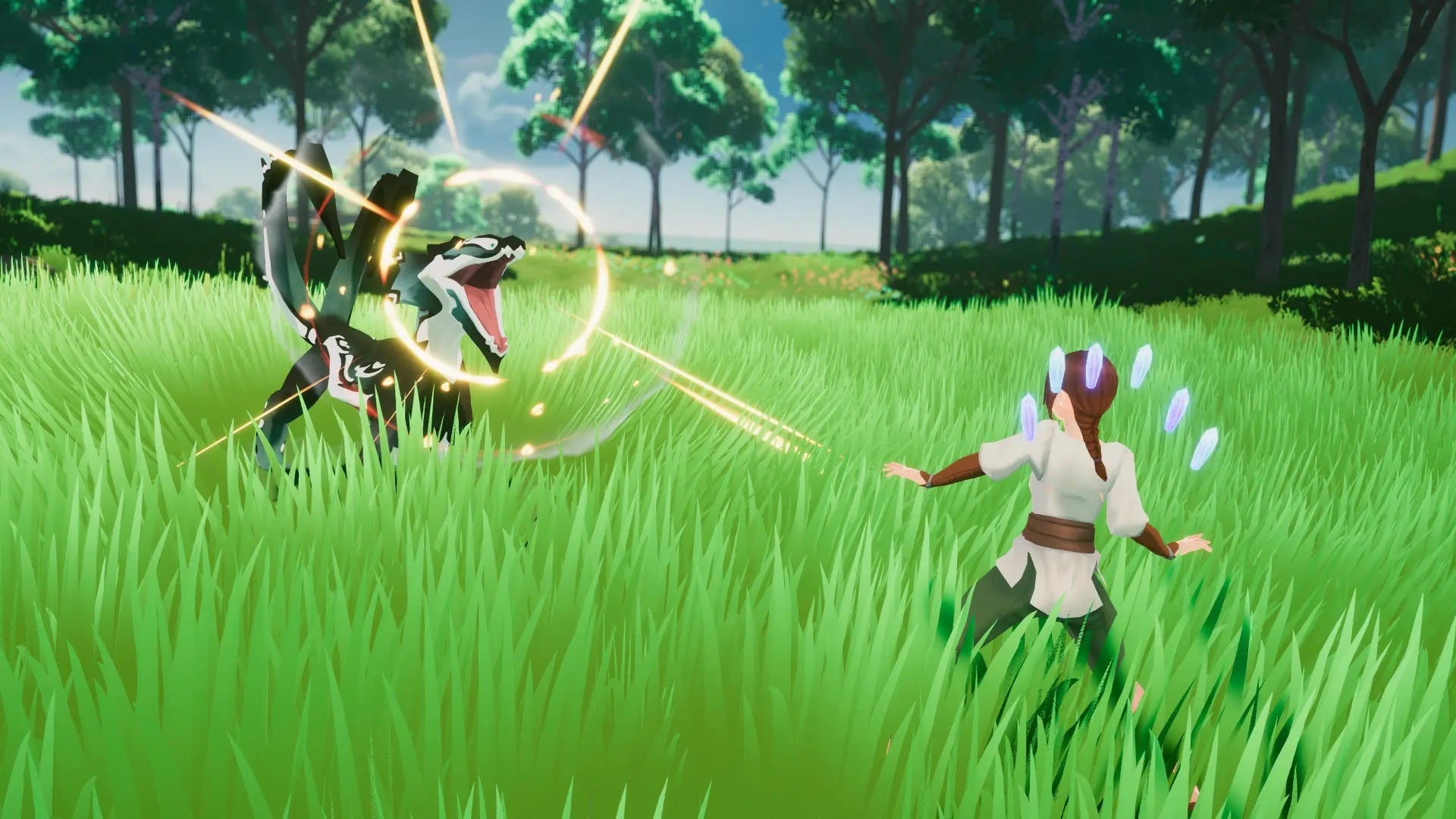 Untamed Isles, a Pokemon-like MMORPG with “optional” play-to-win elements, has been put on indefinite hiatus.

The game had been set for an early access release date of October 6, which will no longer happen.

“A lot has happened in the last 72 hours. It’s been a crazy rush,” was how Phat Loot Studios CEO Joshua Grant opened his Twitch stream on August 12. The stream was organized to respond to the statement just released by Phat Loot, in which the Untamed Isles hiatus was announced, and to answer questions from the community.

Development on Untamed Isles began over two years ago at indie New Zealand company Phat Loot Studios. At the time, Grant called the game and his studio “his dream”, the latter having grown enormously to work on Untamed Isles. More than 70 people have been hired, all of whom will be released in less than two weeks.

The project raised $841,000 NZD (about £420,000) via Kickstarter, more than four times the original goal of $200,000 NZD. Despite raising nearly a million dollars from backers, it barely scratches the surface of the costs and investments Untamed Isles has sunk during its development.

One of the issues that has led to the current state of Untamed Isles is its ever-increasing scope and costs, said Grant, who claimed the team’s weekly salary is around NZ$100,000. (£50,000) per week. The money earned through the Kickstarter covered around two months of salary for the team working on Untamed Isles. Grant admitted that the amount of funding needed was “massively underestimated”.

Looking at the game’s Steam and Kickstarter pages, it’s hard to believe that the debut title from a small indie developer was going to be a massive open-world MMORPG with “1.5 million possible combinations” of animals to tame, PvP , farming mechanics, dungeons and raids, a dynamic weather system and constantly appearing new islands, and a series of physical books. As the Kickstarter reached its lofty goals more and more, more of the promised features had to be added, which equated to more time and more money needed to pay staff.

Development on Untamed Isles could not have been funded by Kickstarter alone. Grant said he, along with Phat Loot’s shareholders and board, personally funded the company to keep it afloat, with none of them taking a salary.

Grant reiterated throughout his stream that development on Untamed Isles would resume and the game would launch at the “right time”, when the crypto market was in a better place. When exactly that will be, no one knows.

At first glance, it is not clear that the game has any relation to blockchain technology. The first mention of play-to-earn items on Kickstarter is around 3/5th of the campaign description. It’s easy to miss or skip because there’s so much you’d need to scroll down to reach it, and it’s also not visible if you go all the way to the bottom of the page.

On its Steam listing, there is no mention of playing to win or blockchain, hiding the fact that the game appears to have violated Valve’s strict ban on blockchain. Under Rule 13, what content is not allowed to be published on Steam reads: “Applications built on blockchain technology that issue or enable the exchange of cryptocurrencies or NFTs”.

Untamed Isles’ Kickstarter claims the project is “gambling first, crypto second” and states that its blockchain aspects are not required to play the game. be an essential part of the game as, in his livestream, Grant said his vision was a “live functional marketplace that allowed players to trade and profit from their assets with each other, to enable them to earn money playing or buying things they want with real money.” (The assets in question here being tokenized versions of players’ creatures.)

And Grant also seems passionate about using blockchain. “I have no regrets about getting into the crypto side,” he added in his stream, “because the opportunity was there.” Grant said he believes the integration of crypto into Untamed Isles will add value to the game’s community and the value of the game as a whole.

Many in the game’s community say they feel scammed and lied to. While they thought they were pledging their money to a Pokemon PC tribute or a TemTem rival, they say they didn’t know the game would integrate the game to win, or the crypto investment was a huge source. funding for Untamed Isles.

Phat Loot issued another statement earlier today repeating that it had not invested any funds received for the game’s development in crypto, and that “all funds raised through crowdfunding and traditional investments” have been allocated to development costs. According to Untamed Isles employees on the game’s official Discord server, “most” of the funds used to build the game were acquired through traditional investments.

Regardless, fans claim that Phat Loot is still investing in blockchain technology as an industry by developing a game based on the idea of ​​trading and selling token versions of tamable monsters.

Asked by a viewer about removing blockchain elements from the game, Grant said he didn’t want to do that because it would be unfair to crypto investors who had already funded the project. From the inception of Untamed Isles, crypto trading was always intended to be a mechanism, Grant continued, and removing the blockchain altogether would mean the end of the project. “I’ll be sitting here telling you it’s over,” he concluded.

Grant also challenged the impression people had of the game’s use of blockchain, citing the negative press he’s garnered in the mainstream press as one of the reasons why the game is playing to earn money. game has received negative feedback from the community.

No acknowledgment was made by Grant on how Phat Loot was unclear with its blockchain intentions.

Either way, some parts of the project community just don’t want to engage in a game that embraces blockchain, either due to general concerns about the long-term viability of cryptocurrencies – or at odds with their environmental impact.

Stix, a YouTuber who runs the MMOByte channel, had this exact issue with the game. Recommended by some of his viewers, Stix posted a video praising the game on July 20. The next day, he posted an update apologizing for unknowingly covering a game that contained play-to-win cryptographic elements, which he said he strongly objected to. Stix also pointed out that he felt Phat Loot had been dishonest about including blockchain technology in Untamed Isles, and if he had realized that, he would never have covered the game to begin with.

Grant, in his Twitch stream, blamed MMOByte’s apology video as the starting point for the project’s loss of public support. Following this, Grant said “pretty much every other major mainstream gaming press company [pulled] to want to cover us”.

Untamed Isles also lost any traction it had gained with influencers. Phat Loot had hired Wolfe Glick, better known as Wolfey, a former Pokémon World Champion, to “help oversee and design” the game’s battle system. affiliates and influencers, only for them to opt out. Grant blamed the exodus on a tweet from Wolfey. It’s believed he was referring to the tweet below, in which Wolfey claimed the game was initially going to have NFTs, but plans for that have been scrapped.

The game originally aimed to implement NFTs, but after talking with the team (and some external factors) they decided to move away from it. There are no crypto or NFT features implemented in the game itself – the only remnant is an external marketplace (optional)


With a lack of media coverage and solid sales figures, Phat Loot says now is not the time to release the game, and that would only run the risk of incurring even greater costs for hosting the game. server and a support team, without any guarantee of income. .

Grant claimed the game had 50 pre-sales, while the company was hoping for between two and three thousand. As the Early Access release is postponed, all pre-sales and Phat Loot tokens (the company’s own blockchain token economy) are refunded.

However, backers on Kickstarter will not receive refunds. Grant said the company currently cannot afford to reimburse backers because they simply don’t have the money. Backers are furious, having paid for the development of a game that is now in indefinite limbo. Backers were initially promised a December 2021 release date, and Grant admitted complaints about continued delays were fair. Now backers don’t know if they’ll ever get the game they paid for, 10 of which paid up to NZ$12,000.

Many backers believe that Phat Loot’s statement is tone deaf. Some say they appreciate Grant’s transparency on the situation, but most are upset to discover that their money has been used to create a system they don’t agree with without them realizing it. and that a game they were promised six months ago is longer on the cards.

Phat Loot says it will now wait for the crypto market to stabilize so its investors can come back and inject the funds the developer says it still needs to bring the game to fruition.

Speaking at the end of his livestream, Grant remained strongly opposed to backers refunding and releasing the game as it was. Finally, he pledged to do everything in his power to finally get the game released. “Trust in me, trust in the project,” he asked.